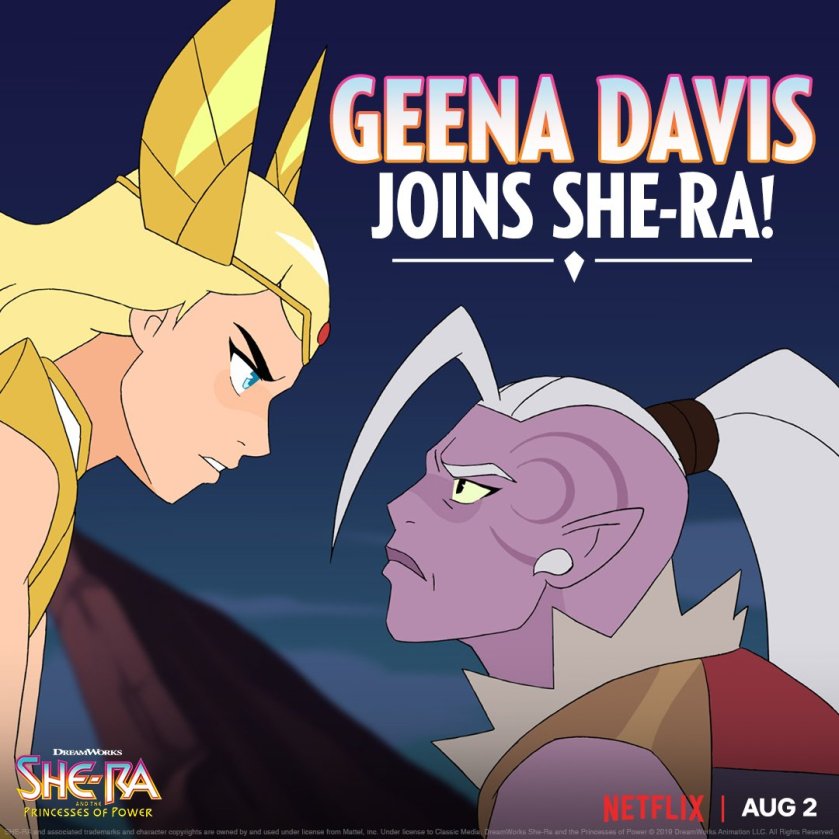 Season 3 of She-Ra and the Princesses of Power is coming to Netflix August 2nd! AND Oscar-winning actress Geena Davis will be joining the voice cast as Huntara!

I know it’s been a while for me but I’ve been thinking a lot about what I wanted to do with this blog and how to go about it. I know I wanted this to be focused on QPOC but I don’t always have things to say and I think I’ve always gotten self-conscious about not being very articulate when it comes to writing out my thoughts.

But I’m letting go of that and I’ll be allowing myself to ramble if need be. So I’ll be widening my own personal scope a bit to POC, LGBTQ people, and QPOC.

I plan to do more reading this year as well as watching more fun stuff. As for this blog, I’ll make sure I’ll post something here once every two weeks (I have two jobs I gotta be realistic) about something, anything really.

Thanks for reading and I hope things work out!

Hey, everyone who reads this site, I’ve been doing a lot of thinking lately and I’ve come to a conclusion about myself.

I just can’t keep up.

Not with anything specific, just more so in the idea that there’s so much, I want to look into to, as well as I’m looking for a better job, and I’m trying my hand in pursuing an acting career that I don’t really have time to keep up with the latest…anything.

Then by the time I do check out things I want to look into I feel as though it’s too late. I’m not one who thinks my input might be all that special anyway so I always get stuck.

I don’t need to keep up with things. I can talk about them when I’m ready and touch on how they made me feel in that time. I don’t need to be up on trends or the latest curve, or anything like that. My pace is perfect for me and that’s how I’m going to roll from now on.

My depression is getting worse again, but I’m going to work with my therapist and try very hard to push forward through the winter. I don’t know when I’ll post next or what I’ll be posting about, but I haven’t abandoned this site.

I look forward to getting back out there.

So, recently I watched the movie Annihilation and while I feel very lukewarm on the film (I think it was trying to say something but I think it ultimately fell flat) but there’s one thing that has stuck with me.

Gina Rodriguez played Anya Thorensen, the standout performance as far as I’m concerned and it the medic of the team. She is also the only lesbian character in the movie.

A lot of people may wonder why this matters; some may even say that she’s a “good” example of how to write a lesbian character, or rather, “a character who just happens to be a lesbian”/ While my feelings on thoughts like that are complicated my main issue with Anya Thorensen is the framing, specifically, her death.

Yes, basically all of the characters die, but Thorensen’s death is the most brutal and that is where I take issue.

During the movie, we watch Thorensen get attacked by a kind of bear-monster. We watch as she tries to get away, dragged back by the creature, get tossed around a bit, and then we watch the monster rip her jaw off and watch her corpse lay in a pool of her own blood.

Tuva Novotny’s character, Cass Sheppard, is killed by the same creature as Thorensen, but she’s killed off screen. Tessa Thompson’s, Josie Radek, simply…walks off and vanishes, and Jennifer Jason Leigh’s Dr. Ventress…well I don’t know how I would describe her death but it nowhere near as brutal and violent as Thorensen’s death.

You see…when you have one queer character and then you go out and treat them with the most brutality…I’m going to side-eye you very hard.

I guess…I guess what I am trying to say is that creators need to be mindful of how they’re treating their queer characters. Pay attention to what you’re putting your queer characters through and how it stacks up to your straight characters.

Anyways…I hope I explained myself well enough in this post and I’m sorry I’ve been away for so long. Things have been very busy for me lately. But I’m going to try to be more regular with my post.

My chapter reviews will be coming back and, since I want to speed things along, doing multiple chapters in one post and going forward.

Hey, with Christmas just around the corner for me I wanted to write this up really quickly since it’s a small part of the book that bothers me.

The character descriptions in The Maze Runner run into a problem that I’m used to seeing across many different books from many different authors. It’s not an issue that can ruin a work for me, I even did this a lot when I was younger, but something I want to point out here.

There are twelve named characters in the story so far: Thomas, Chuck, Newt, Alby, Minho, Ben, Gally, Zart, Frypan, Clint, Jeff, and Winston. First of all, that’s a lot of characters. Sure, not all of these characters are important, but still. Second of all, only Alby and Minho are described in terms of skin color and/or race.

In the writing circles I hang around in it’s a much talked about mechanic that highlighting a CoC (character of color) race or skin color while not doing that for white characters not only marks the CoCs as ‘other‘ but makes white the default.

Going off of the first 16 chapters there’s only one black guy and one Asian guy (there may be two Asians since an Asian guy was mentioned when Thomas first got out of the box, but he’s never brought up again so it could just be Minho). For all the named characters it’s not great on the racial diversity front, especially with how many boys are supposed to be in the Glade.

Sure, some of the unnamed Gladers could very well be nonwhite, that’s probably the case, but with Thomas’s descriptions it…it’s just a bit disappointing.

The solutions to this vary, though the one I’ve seen the most is that if an author is going to describe race and skin color it should be done for every character, not just the nonwhite ones.

Again, this doesn’t ruin the book, or any book, for me it’s just something I noticed and wanted to point it out. We’ll have to see if this continues with the rest of the series.